One of the most important events in the history of Armenia happened in 405 AD, when the new Armenian alphabet was created. 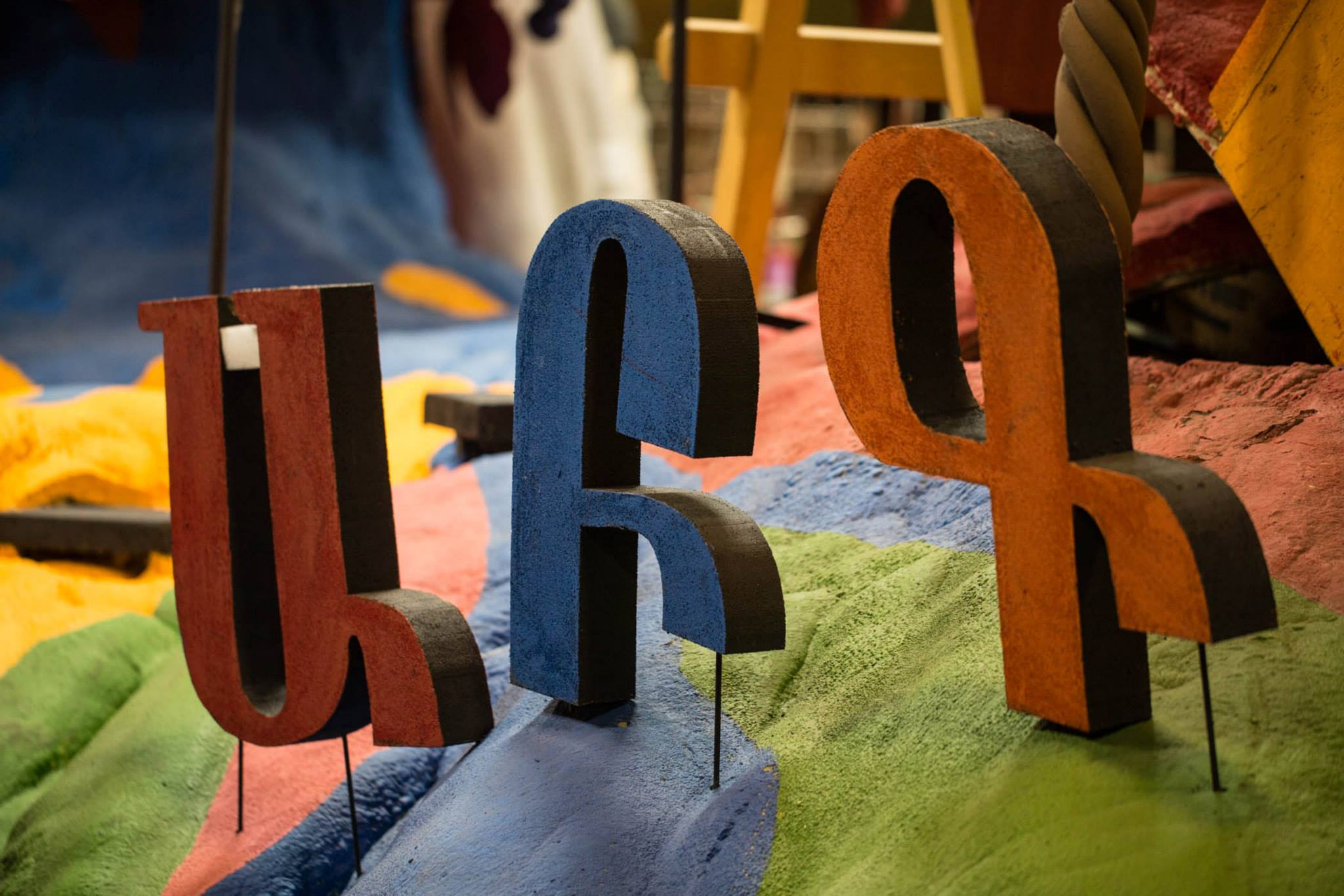 One of the most important events in the history of Armenia happened in 405 AD, when the new Armenian alphabet was created. Before that, for about 16 hundred years, various forms of cuneiforms had been used in Armenia. After the adoption of Christianity as the state religion of Armenia in 301 AD, the Church regarded the old systems of writing as inappropriate for religious use. An attempt was made to use the Greek and Syriac languages as the official languages of the Church and the state, but this was rejected after several decades, mainly because the ordinary people did not understand those languages, which made the spread of the new religion more difficult, and also because of the resistance of the nationalistically minded aristocracy and bureaucracy. At the end of the IV century there were several attempts to adjust the old systems of writing to the needs of the Church, but they all failed, because the proposed versions did not reflect correctly the phonetic system of the language. In the nineties of the century king Vramshapuh asked a high-ranking official in his chancellery and a prominent scholar Mesrop Mashtots to make another attempt. Mesrop Mashtots travelled to Alexandria, then the biggest cultural and scientific centre of the world, and studied there various principles of writing. He came to the conclusion that the Greek alphabet was the most advanced one of that time since it had one letter for each sound and was easy to memorise and to use. So he created an alphabet which followed the principle of ,one letter for one sound, and was written from left to right and had capital letters, unlike all other languages of Eastern Anatolia and the Middle East, which were mostly written from right to left and had no capitals.

In 405 Mesrop Mashtots returned to Armenia, bringing with him the 36 new letters of the Armenian alphabet. The same year the Bible was translated anew and re-written in the new alphabet. The Armenian translation of the Bible, which contains more words than the Hebrew and Greek originals, was so perfect that it soon came to be known as the ,Queen of Translations,. The new alphabet stimulated an unprecedented boom in literature, and the V century was later called the ,Golden Age of Armenian Literature,.

The first words written in Armenian were as follows:

,to learn wisdom and exhortation, to understand sayings of reason.,

Armenian is an Indo-European language with about 6.7 million speakers mainly in Armenia (,,,,,? [Hayastan]) and Nagorno-Karabakh, a de facto, though unrecognised, independent republic in the Nagorno-Karabakh region of the South Caucasus. There are also Armenian speakers in many other countries, including Russia, Georgia, Ukraine, Turkey, Iran, Cyprus, Poland and Romania.

Armenian is the offical language of Armenia and Nagorno-Karabakh, and has official status as a minority language in Cyprus, Poland and Romania. Until the the early 1990s schools in Armenian taught in either Armenian or Russian, however after the collapse of the USSR, Armenian became the main medium of instruction and the Russian-medium schools were closed. In 2010 Russian language education was reintroduced in Armenia.

Not much is known about the Armenian language before it was first written in the 5th century AD, though the Armenians are mentioned in inscriptions dating back to the 6th century BC. The type of Armenian spoken and written in the 5th century is known as Classical Armenian, or ,,,, (grabar - "literary"). It contains numerous loanwords from Parthian, and also from Greek, Syriac, Latin and other languages such as Uratian. Grabar continued to be used as a literary language until the late 19th century.

The Armenian used between about the 11th and 15th century is known as Middle Armenian, or ,,,? ,,,, (mijin hayeren), and contains more loanwords from Arabic, Turkish, Persian, and Latin. The two main modern forms of Armenian emerged during the 19th century when the traditional Armenian homeland was divided between the Russian and Ottoman Empires.

This resulted in widespread literacy and to an increase in the amount of literature written in modern Armenian, rather than in the classical language. Armenian alphabet In the late 4th century AD, king Vramshapuh of Armenia asked Mesrop Mashtots, one of the officials in his chancellery and a prominent scholar, to create a new alphabet for Armenian.

Before then, Armenian had been written with 'cuneiform' scripts, which was deemed unsuitable for religious works by the Armenian Church. Mashtots travelled to Alexandria, where he studied the principles of writing and came to the conclusion that the Greek alphabet was the best alphabet in use at that time because there was an almost one-to-one correspondence between sounds and letters. He used this model to come up with a new alphabet, which he presented to the king when he returned to Armenia in 405 AD.

The new alphabet was well-received and a new Armenian translation of the bible was published in 405 AD. Other literary works soon followed. There are two standard forms of Armenian: Eastern Armenian, spoken mainly in Armenia, Nagorno-Karabakh, Georgia and Iran; and Western Armenian, spoken by the Armenian diaspora in many countries. They are more or less mutually intelligible.

Direction of writing: left to right in horizontal lines

There are a few minor differences in the pronunciation of the letters between the two standard literary forms of Armenian: Western and Eastern.

Most of the letters have numerical values. 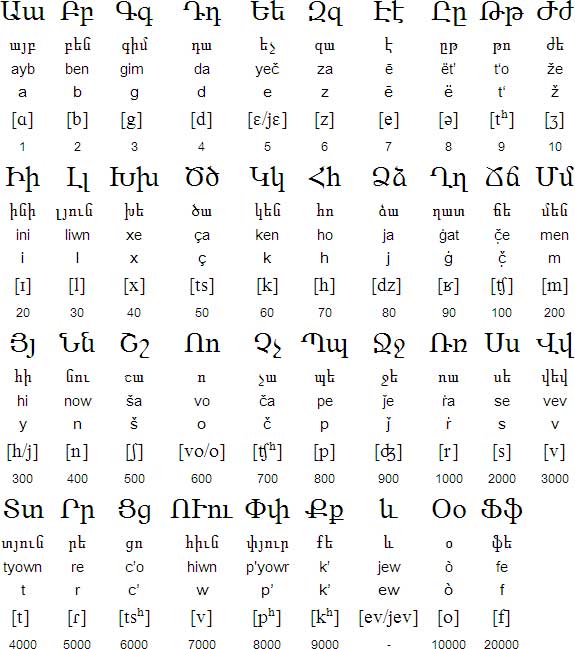 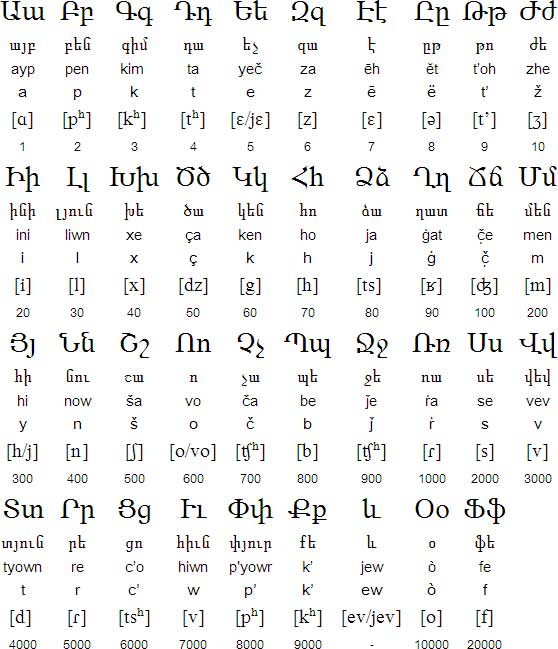