The Armenian people have been described throughout the centuries as adaptable, resilient, enterprising, and steadfast. How they managed to survive repeated invasions, destruction, and persecution, while large and more powerful states disappeared and how they were able to make significant contributions to world civilization is a tribute to the Armenian people.

The Armenians are one of the few peoples of antiquity who, together with their language and culture, have survived to the present day. While their existence as a national, political, and cultural entity dates from the first millennium before Christ, recently accumulated evidence offers conclusive proof that the civilizations erected by the immediate predecessors of the Armenians go back to the second and third millennia B.C. 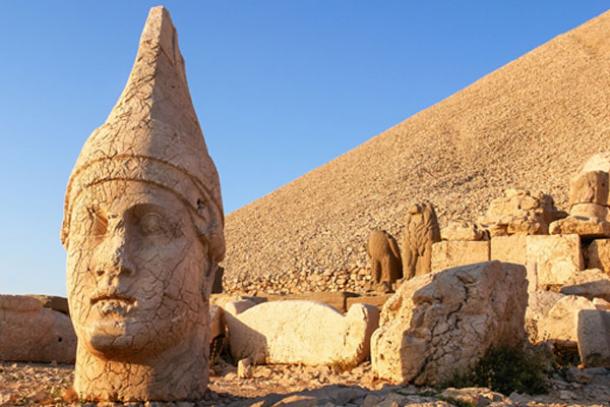 Archaeological excavations in Armenia reveal that the Armenian plateau in Eastern Anatolla has been one of the earliest cradles of civilization going back as far as the Early Stone Age.

Historians write that from the sixth to the second millennia B.C., the Armenian plateau was inhabited by a multiracial, indigenous population which, in addition to elements in common with other peoples, developed a specific culture. Armenians were described as people with dark complexion, prominent nose, high head and flattened occiput. During this formative period, the Armenian people associated themselves with metallurgy, various crafts, and sciences. Armenians have been described through the centuries as adaptable, resilient, enterprising, and steadfast. Armenians hold the distinction of being the first nation to declare Christianity as its state religion. How Armenians managed to survive while larger and more powerful states disappeared, and how, at the same time, they were able to make significant contributions to world civilization is a tribute to the Armenian people.

As with many ancient peoples, the origin of the Armenians contains elements of myth and unresolved scholarly arguments. Many historians give a rather over-simplified account of the origin of the Armenian people. According to the Greek Historian, Herodotus, the Armenians had originally lived in Thrace from where they crossed to Phrygia in Asia Minor and had then gradually moved west of the Euphrates River to what became Armenia. The Historian states that Armenians came from two directions, one group from the west, or Phrygia, and the other from the Southeast, or the Mesopotamian and Zagros region. In other words, according to the ancient Greeks, the Armenians were not the original inhabitants of the region.

Other Historians indicate that from the ninth to the sixth centuries B.C., a large part of historical Armenia, called Ararat by its contemporary neighbors, comprised the Kingdom of Urartu. This Kingdom disintegrated during the middle of the sixth century whereupon the native tribes, including the Armen and the Nayiri groups were unified and became part of the dominant Hayassa group.

Their Indo-European language was imposed on the conquered Urartuans, who spoke a non-Aryan language. Thus did the Armenian Nation take form, its people being the political, ethnic, and cultural successors to the Hurrians, pre-Hittites, Hayassas, Nayiris and Urartuans. This newly formed nation was called "Hai" after the name of the Hayassa tribal federation and the country "Hayastan". The neighboring peoples called the Armenians "Armen" and their country "Armenia" after the Armens.

The evil Bel, leader of the Babylonians, pursued Haik. In the ensuing war, good conquered evil when Haik killed Bel and created an Armenian Nation. Haik became the first Armenian ruler and his sons continued to lead the Armenians until King Paruir, a descendant of Haik, formed the first Kingdom of Armenia.

The first Armenian settlers came to America as early as the seventeenth century. Thereafter, bands of Armenian workers, merchants and students arrived initially in small numbers toward the end of the nineteenth century. The Massacres of 1894-1896 and the genocide of the Armenians in Turkey in 1915 drove even more immigrants to America.

Today, Armenians can be found in every corner of the globe. Although, the Armenian people are a very small ethnic group, Armenians have made significant contributions in every field of endeavor. Long known as excellent educators, scientists, artisans, musicians, and merchants, Armenians have used their skills to benefit the countries that have given them a home.

Did you know that we have two very impressive legends in Armenian history? Haig the Hero and Ara the Handsome (also called Ara the Beautiful).

There were two episodes, although of legendary origin, which proved first, the invincible freedom loving spirit of the Armenian people, and second the deep loyalty of the Armenian towards the sanctity of their family.

According to the traditional history of Armenia, Haig the Hero, father of the Armenian people, was the legendary patriarch of the Armenian nation, and the fourth lineage of Noah. Haig the Hero refused to accept the conditions set by Bel, the legendary tyrant of Asyria, that he (Haig) would enjoy every freedom and comfort if only he recognized the sovereignty of Bel. After the Tower of Babel was destroyed by God, Haig the Hero and his followers, freedom loving spirits faced Bel in battle, killed him, and secured unconditional freedom for himself and his followers. After the battle Haig migrated further to the north, where according to legend, he founded Hayastan. This legend, in its simplicity proves that the Armenian spirit does not tolerate slavery, but has a deep love for that heavenly blessing known as freedom. And it is because of this that the Armenians have lifted their national legendary Hero and their forefather up to the skies and named the constellation ,Orion, after him,HAIG.

The legend of Ara the Handsome, son of Aram, was the seventh generation after Haig, and king of Armenia (more probably Urarta). Samiramis, who was the queen of Assyria, desired Ara the handsome. Because he was already married and did not want to betray his loyalty to his home and family, he refused to marry queen Samaramis.

After Ara declined her advances she invaded the country and Ara was slain. Thus, Ara the Handsome, a legendary king of Armenia gave his life to save his honor in remaining loyal to his marriage vow.

The legend of Ara the handsome (also called Ara the Beautiful) and Samiramis has been kept alive for some 3000 years. It is possible that such an event has really taken place Due to the story,s transmittal by word of mouth for so many centuries it has taken its present legendary character symbolizing the loyalty of the Armenians toward their home and family. Armenians have truly remained loyal to their home and family not only in the distant past but also in modern times.

During the massacres of 1895 and 1915 the Armenian men and women proved their loyalty towards their home and family with a spirit as heroic, as beautiful, and moving as that of Ara the Beautiful. Thousands of Armenian women threw themselves into rivers or the inferno of blazing houses, so they may not suffer the lust of the Turk or live in his Harem. The story of Lucretia who committed suicide after she was violated by Tarquinus Sextus, was acted out thousands of times by Armenian women who became the modern Lucretia symbolizing chastity and loyalty to married life, truly believing that these virtues were the foundation of home and nation.

Had these two legends not existed they would have been created sooner or later by the Armenian people who have been endowed with the love of freedom and home throughout their history.