If the scriptures are rightly understood is was in Armenia that paradise was placed, . But whatever may have been their destiny and it has been bitter whatever it may be in future, their country must ever be one of the most interesting on the globe. ,And perhaps their language only requires to be more studied to become more attractive. Armenian is the language to speak with God. George Gordon (Lord) Byron (1788-1824) 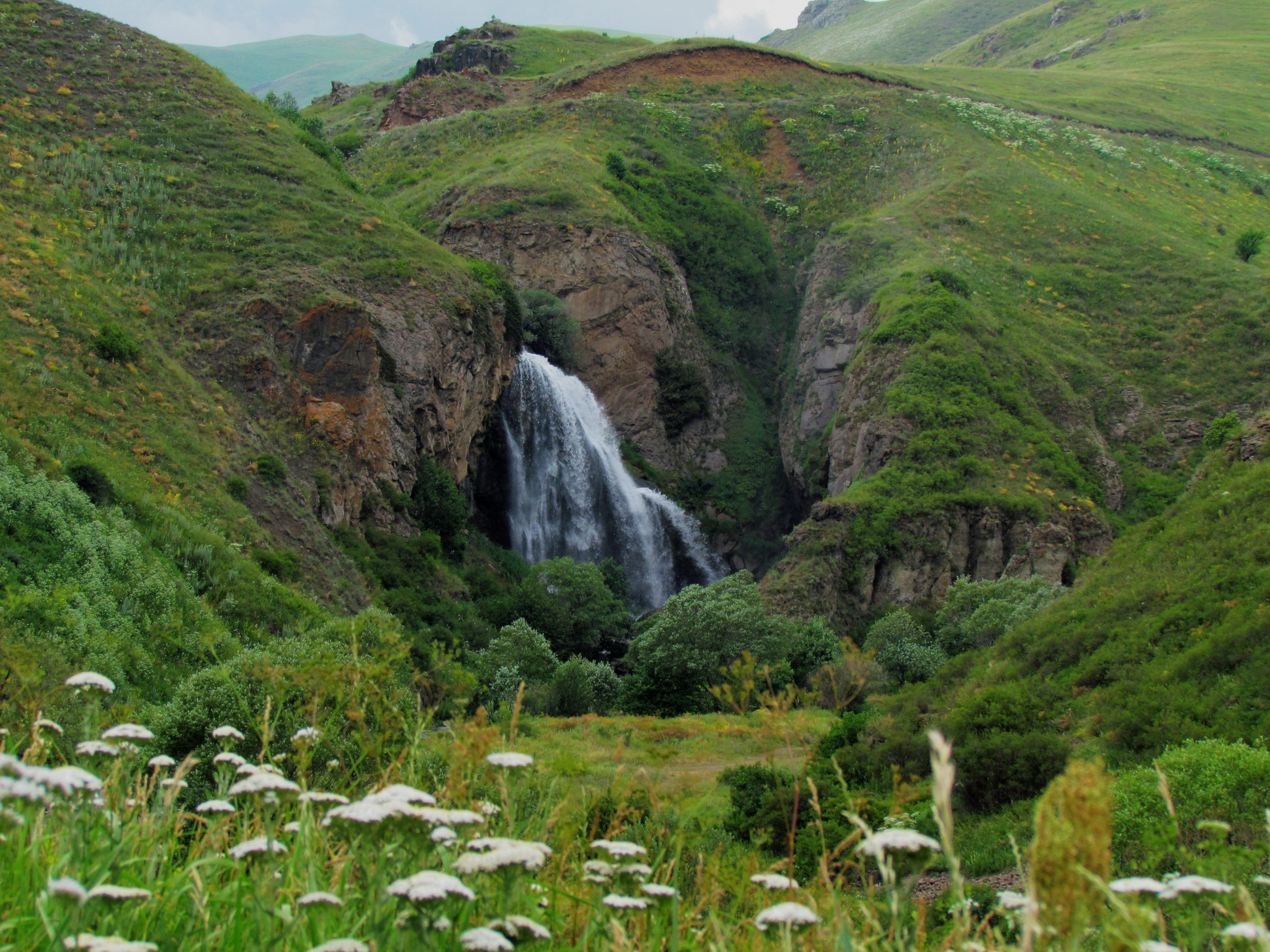 Armenia is a land of rich 3500 year-old history, the mixture of ancienty with modernity and the land of exciting culture.

It is the first nation to adopt Christianity in the early 4th century. Over centuries, Armenia has been ruled by the Romans, Byzantines, Arabs, Persians and Ottomans. This mountainous terrain is bordered by Turkey on the west, Georgia at the north, Nagorno-Karabakh Republic and Azerbaijan to the east, Iran and the Azerbaijani to the south.

The trip to Armenia can be described as immersion in the past of this small nation, in which often occurred the sad moments, admiring the stunning scenery, which open during the descent from the majestic mountains of the Caucasus and the beautiful Lake Sevan, which is virtually untouched natural oasis. It is also a mystical appearance of the mythological Mount Ararat ` the sacramental mountain of the Armenians related to the biblical story of Noah`s ark.

Armenia, praised by Mandelstam as a country of screaming stones, for centuries was located on the Silk Road, and even 3000 years ago was named by the Greeks the country of rivers and majestic mountains. Armenian land dotted with ancient monasteries everywhere, with green valleys, caves and canyons. Here, everywhere you can admire the khachkars ` the crosses carved in stone, that are an evidence of the deep religious faith of the Armenians. But above all, it is the voyage and acquaintance with the people, hospitable and proud of their traditions, swept through the centuries its cultural heritage, preserved to this day in the priceless manuscripts of Matenadaran in Yerevan. This country is like an open air museum, where are approximately 4,000 monuments and places of worship scattered throughout it , as a treasure chest, faceted by amazing colors of nature.

Only in Yerevan, which is among the oldest settlements, there are more than 40 museums and galleries. On the way to the monastery Sevanank of ninth century, you can contemplate the spectacular mountain peaks, reflecting in the lake. The fortress Garni is the only survived monument of the Hellenistic architecture of the Caucasus, it is a symbol of the power of Mithras, the sun god.

Sevan, which is named the Armenian sea, situated at a sublimity of 1900 meters and is amongst the largest and most amazing mountain lakes in the world. Here is a wonderful enveloping air, the soft sun and plenty of trails for hiking, biking, rafting or skiing.

One can compare the trip to Armenia with the travel back to the roots. It might become a pilgrimage, a chance to touch a relic. Holy places are everywhere there - temples, monasteries, churches - all of them testify on the firmness of Christian faith, and the pride of being the first in the world to adopt Christianity as official religion in 301.

In Armenia, you can experience mountain-skiing, rafting, mountain stream fishing, healing mineral baths, hunting, and mountain-biking but Armenia is especially valued by people who enjoy culture tourism. They are attracted there by tremendous beauty of nature, natural rest, exotic atmosphere of mountaineers` way of life, the hospitality of Armenian people and unique ancient culture of Armenians. Visiting places where great civilizations prospered, bloody battles raged, historical events of world importance occurred - isn`t it a traveler`s dream? Armenia is indeed unique. Its ancient churches and castles, high-mountain lakes and rivers, majestic rocks, deep canyons hide thousand of stories mysteries. Nowhere in the world are there such mountains, such ancient history, such beautiful female eyes, such divine cognac and such thin bread. -The most delicious meat is on bones, the best land is on stones- - say Armenians about their country.

Armenia - the most ancient country - stood on the routes connecting Europe and Asia. This not only the first ever Christian state but also one of the earliest states on the earth - already in the 9th-6th centuries BC the powerful state of Urartu existed on the territory of Armenia. Numerous epochs left their traces on its territory, so in terms of quantity of historical and cultural monuments this country can be considered as one of the most interesting in the Old World.

Armenia is sometimes called -open-air museum-. There you will find traces left from almost all ancient civilizations of the Old World, and numerous monuments of art and architecture make the country a keeper of culture masterpieces. The ancient architectural monuments, original traditions and customs, delicious ethnic cuisine, exclusive arts and crafts and unique nature of places where high mountains are replaced by deep gorges, woods - by semi-deserts, and droughty plains - by snow-peaked mountains are waiting for you.

No matter your preference, Orient-Travel`s expertise and Armenian`s huge accommodation range mean that we can certainly build a tour with accommodation perfectly customized to you. A tour to the Armenia would, for many, be incomplete without armenian traditional cuisine and armenian wine or brandy.

With posh boutique hotels, and luxurious lodges in the most destinations, Armenia offers a wide range of inventive, intriguing and often truly extravagant accommodations. Catering to families, romantics, and relaxation enthusiasts, the assortment in style and the overall value is sure to suit any style of traveler.

Visa and Passport Requirements: EU nationals do not need an entry visa for travel to Armenia and are allowed to stay up to 180 days a year without a visa (usually a maximum of 90 days per visit). This applies to tourism and business trips. Visas for Armenia are required by all other nationals referred to in the chart above, except those continuing their journey within 48 hours, providing they remain in the airport transit lounge, and are holding all documents required for the next destination and a confirmed onward ticket. To enter Armenia, a passport valid for six months is required.

Transit: Foreign nationals transiting through Armenia must present tickets to a third country or a visa to a third country and can stay in Armenia for no more than 72 hours except in cases of emergency. If leaving the airport, a transit visa may be issued on arrival for a stay of maximum three days, provided the visitor is holding a visa (if required) for the final destination.

Vaccinations: It is important that you visit a travel health specialist 2`3 months before departure to review vaccination options and possible prophylaxes.

Hospitals: In the event of a medical emergency, Armenia has some of the best medical facilities in region. Most are located in Yerevan.

Armenia is generally quite safe to visit; however, as with any travel, there are always associated risks. Most visits to Armenia are trouble free. The risk of being a victim is, however, much less likely than in most western European and American cities. Far greater risks after dark are either tripping up on pavements in need of repair or else falling into holes dug during the pavement,s reconstruction.

Language: While Armenia is an ethnically homogeneous country, where Armenian is the official language and is spoken as a first language by the overwhelming majority of its population. Russian is the most common foreign language spoken by the majority of Armenians. English is the second and the fastest growing foreign language in Armenia. French and several other languages have also begun to be studied and used.

Currency: The Armenian currency is known as the ,,dram,,, and the currency is abbreviated as AMD (Armenian Dram). The dram is accepted everywhere, and in some rare cases US dollars will be accepted for larger purchases - though the dram is the only legal currency for commerce. US dollars, Euros and Rubles can be exchanged almost anywhere in the country, with other major currencies also easy to exchange. Exchange booths and commercial banks do not charge a commission and rates are almost always quite competitive.

ATMs (Bankomats) are widely available in larger towns; though outside of Yerevan, you should have a major system such as Visa or MasterCard on your card for it to work.

Credit cards are not widely accepted outside Yerevan.

Social Customs: Armenians are, by and large, an extremely friendly and welcoming people. It is customary to greet people as you pass them in the street or at the house, with a simple `hello`. Greetings in general are an important social practice. Learning key phrases in Armenia is always appreciated, and local hotle staff will happily assist you.

When photographing individual people, it is always advisable that you ask permission first. While many people are willing subjects, a few would prefer not to be photographed.

The country is predominantly Christian.

Tipping: After tasting a delicious Armenian dish in a restaurant or caf , you,ll be faced with another dilemma: to tip or not to tip? As a rule, the tip will be included and mentioned in the bill (it,s usually up to 10% of the dishes and drinks you order). If not, you,ll be appreciated to leave up to 5-10% tip (or more, if the service is exceptional).

Dress code: Armenia is a Christian country but sometimes more conservative than other Christian countries. There is no dress code in Armenia and churches shorts are acceptable. There are some common rules posted in every church (for example women should enter the church with head covered by scarf , they cannot enter church in strapless dress) but they are not strict. Even though there is no certain dress code neither for men, nor for women, there are still several underground rules that shouldn't be ignored. If you are a tourist, you can dress as such, however, whatever comfort you might find in wearing minimal clothing will be canceled out by the discomfort of having men stare at you all the time. Oops, hey! This has its birght side, depending on how optimistic you are! Attention? Then attention! Be confident, walk your head high and let them admire your beauty, after all it's safe for you, isn't it? Whether you dress modestly or a little bravely, if you are somewhat attractive, you certainly can't prevent compliments and filtration, which is usually pretty harmless. Men will call you qaxcr (sweety), sirunik (cutey), etc, the best is not to react to this, unless you are willing to engage in a romantic conversation.

Orient Travel Armenia has a prized collection of tours in Armenia, adapted for both group and independent travel. Having thought through all the details, all you need to do is select a tour and then drift away for total relaxation and rest in the Armenia. Each tour can be adapted to perfectly suit your desires and requirements` or we can start from scratch and design a tour entirely made for you.

To start the process, please tell us about your dream vacation by e-mailing with a trip request. We will help you plan the absolute best vacation of your life.